What is Day of the Dead?

Day of the Dead or Día de los Muertos as it’s known in Spanish is a Mexican holiday where families welcome back the souls of their deceased loved ones for a brief reunion that includes food, drink, and celebration.

It’s celebrated on November 1 and 2 in Mexico and throughout Latin America. Day of the Dead originated several thousand years ago with the Aztec and other pre-Columbian civilizations in central Mexico who believed that mourning the dead was disrespectful. These pre-Hispanic cultures believed that the dead were still members of the community, kept alive in memory and spirit and that during Day of the Dead they temporarily returned to Earth.

Today’s Day of the Dead celebrations are a combination of pre-Hispanic religious rites and Christian feasts-a reflection of Mexico’s rich multicultural background-Mesoamerican ritual, European religion (it takes place on the Catholic holidays of All Saints’ Day and All Souls’ Day), and Spanish culture.

Although people will often dress up in fine clothing and paint their faces in bright color or even wear colorful skull masks, Day of the Dead is NOT a Mexican version of Halloween. It’s simply a time to demonstrate love and respect for the dead amongst a backdrop of color and joy. 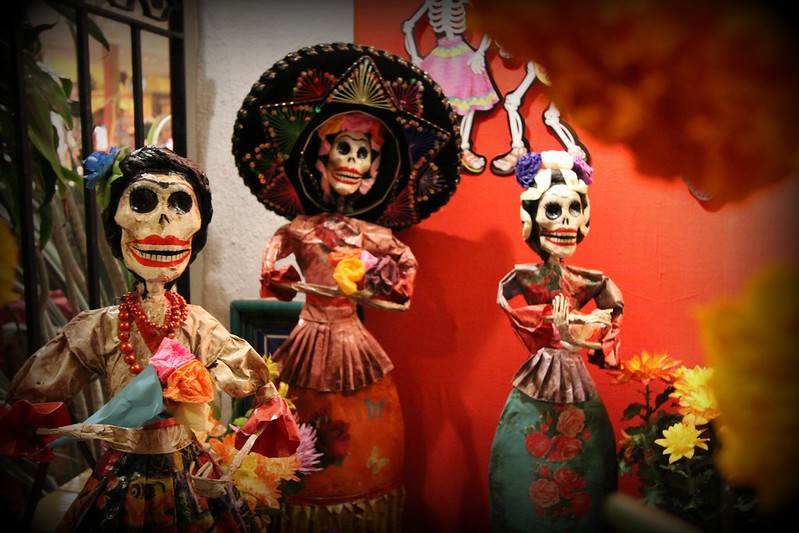 The meaning behind the Day of the Dead altars

Day of the Dead altars are made as a way of remembering and honoring deceased friends and family and help in guiding the spirits back to the land of the living. In Latin America, altars are constructed in homes as well as in churches and at gravesites. The altars vary from home to home and include a variety of symbols and objects which represent the person or persons who have passed on (articles like a favorite book, a cherished toy if the deceased was a child, a football, etc).

They are adorned with marigold flowers, Day of the Dead bread (known in Spanish as pan de muerto), candles, sugar skulls, papel picado (perforated paper-it's believed that the holes allow a way for the souls to travel through and visit and also the delicate nature serves as a symbol of the fragility of life) and favorite food and drink of the dead (because it's believed that the dead will get hungry on their journey back to the land of the living).

We would like to invite the BC3 Community to participate in our Day of the Dead celebration by bringing an item for their deceased loved one (a photograph or object serving as a symbol) to place on the library's altar. You can place your item on the altar either on the afternoon of Monday, November 1 or Tuesday, November 2. Just make sure your name and either an email or phone number is listed on it. 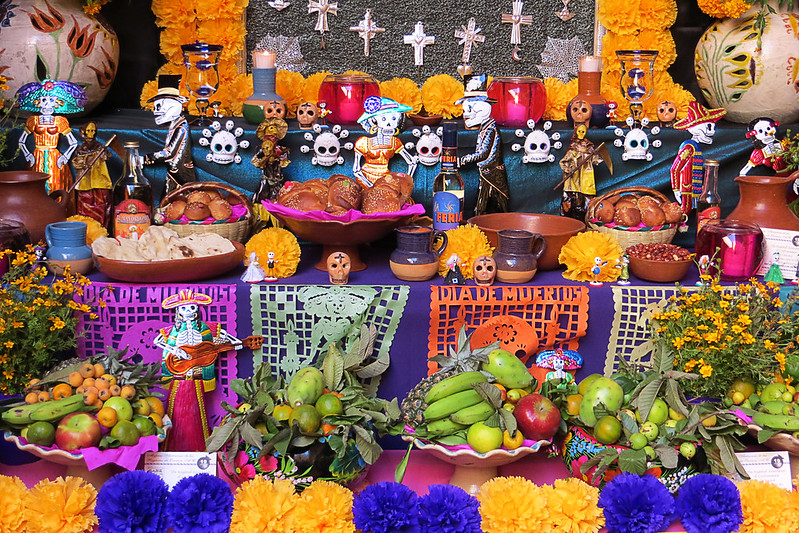 Coco film showing at the HFLC 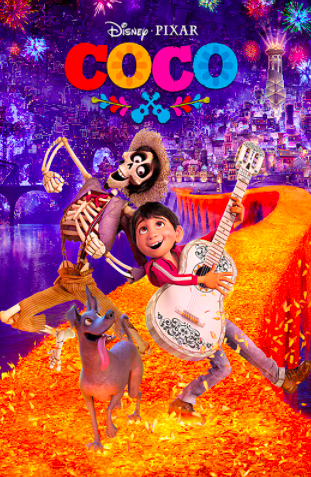 1, the Heaton Family Learning Commons will be showing the 2017 Disney Pixar film Coco. The film tells the story of a young Mexican boy named Miguel who journeys through the world of his ancestors on the Day of the Dead. It's a wonderful visual introduction to not only the beautiful traditions of this holiday, but also the sweet and poignant side of it.

The BC3 Phi Theta Kappa chapter invites you to enter a Day of the Dead skull drawing for a chance to win a prize:

Submit your drawing to the help desk on the upper level of the Heaton. We have paper skull outlines and colored pencils available to use for your creations. 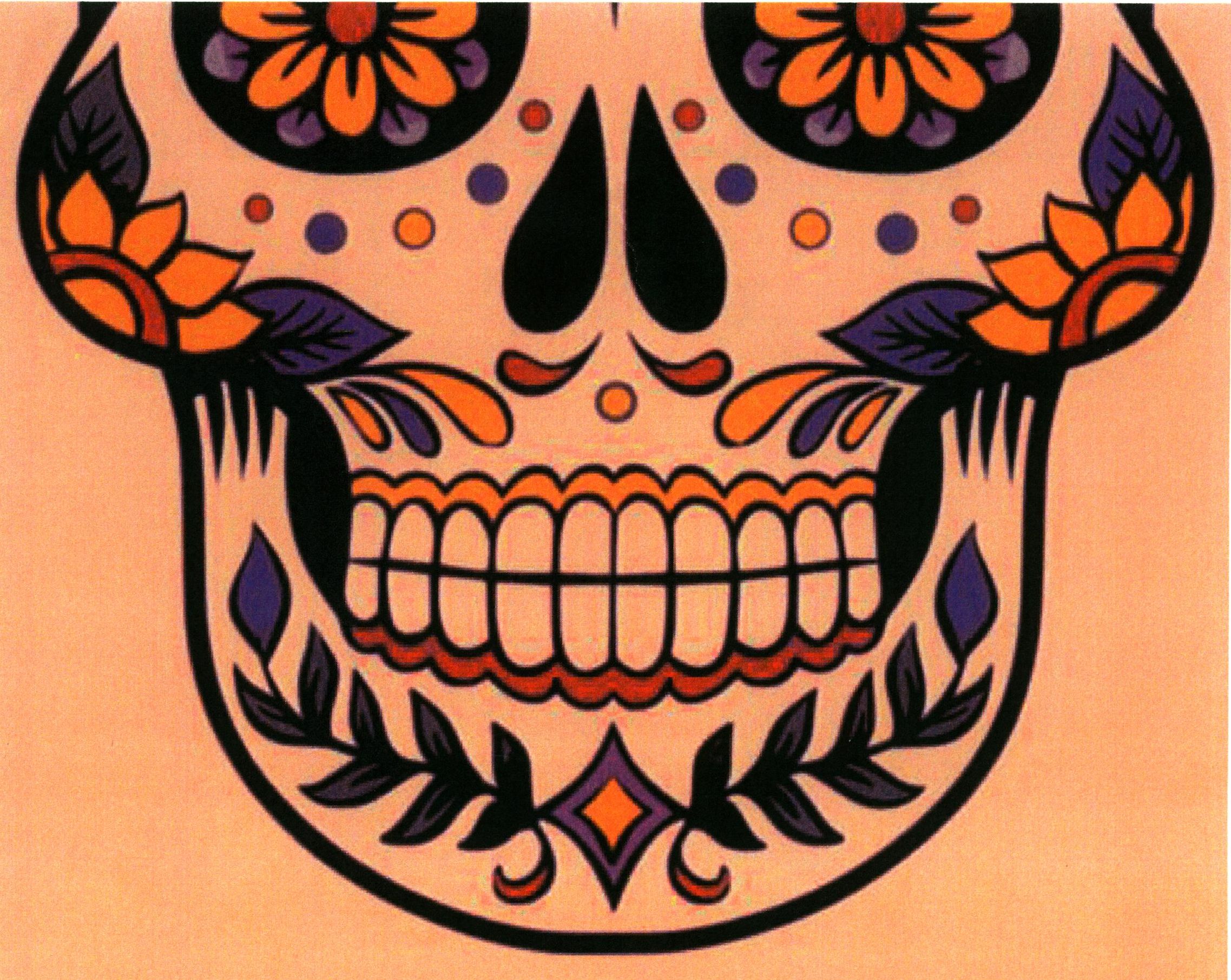 Mini Day of the Dead fiesta at the HFLC

On Monday, November 1 at 2:30PM, the Heaton Family Learning Commons will be having a small fiesta to celebrate Day of the Dead. We'll be having food and drink that is typically found during Day of the Dead celebrations. There will also be speakers on hand to talk about the significance of the holiday. 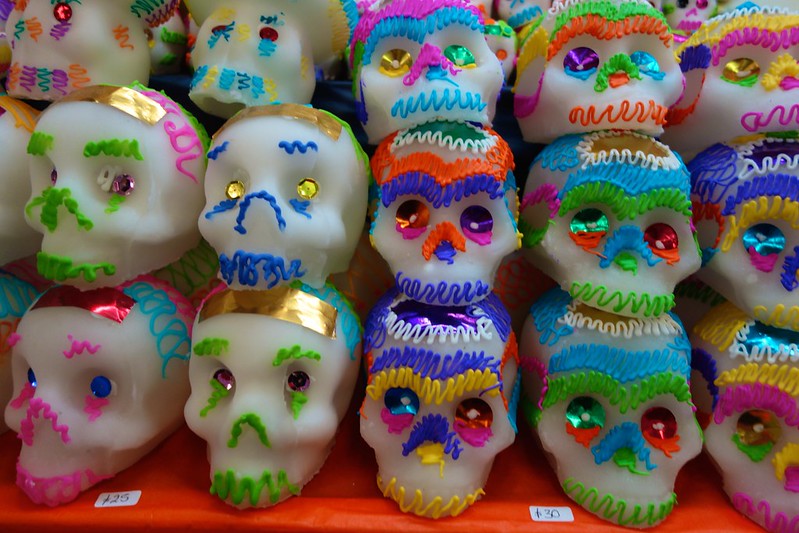